We looked out over the basin at Chesapeake City to see it wreathed with tendrils of mist on a cold mid 40's morning. It felt like almost October today as we hiked around town waiting for the tide. Chesapeake City like many water front areas has gone upscale in the last 30 years. Its old houses have new paint and landscaping and many now contain interesting shops selling local art, crafts, and antiques. The town was founded when the C&D canal was dug. This cut between the Chesapeake and Delaware Bays was started in 1804 and then stalled for 20 years as the money ran out. It restarted in 1824 and was opened for use 5 years later. (This is a considerably less efficient construction schedule than Governor Clinton managed to put together. It only took something like 5 years to run the contemporary Erie between NY and Buffalo).

Today the 14 mile C&D is operated by the Army Corps and is the third busiest ship canal in the world with over 65000 commercial users and countless yachts passing through annually. The early canal had several locks and to make up for water lost in the locking process it also had a pump house at Chesapeake City to bail water from Back Creek into the canal. This is preserved as a museum where the two huge steam engines and the massive wooden waterwheel remain on display. The water wheel had 12 troughs that scooped up water and dumped it into the canal. The engines worked for 76 years with one recorded breakdown says the exhibit. 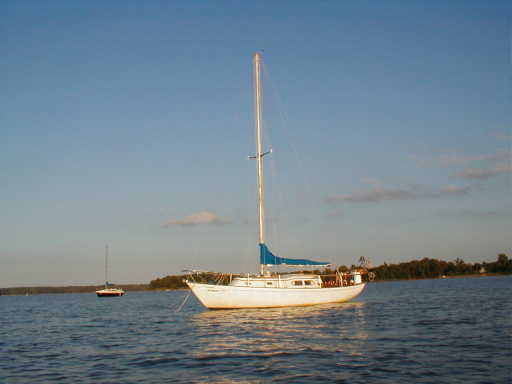 Titania at anchor in Veazey Cove