The Titania Cruise to the Chesapeake 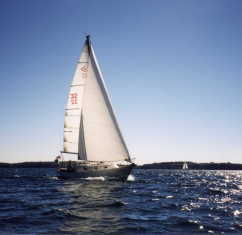 Chris and Sue hope to take Titania down to the Chesapeake this fall (2000) spending about a month (a leisurely trip). We'll haul her out for the winter and then bring her back next spring to upstate NY.

A number of things have to go right for this scheme to succeed: the newly rebuilt motor has to run (there'll be a lot of motoring – much of the trip is in canals); the new power system (golf cart batteries, high output alternator) has to keep our computers running so Chris can work (he does have a job you know!); our marriage has to survive the experience of living together in a space of about 80 square feet; amongst others. 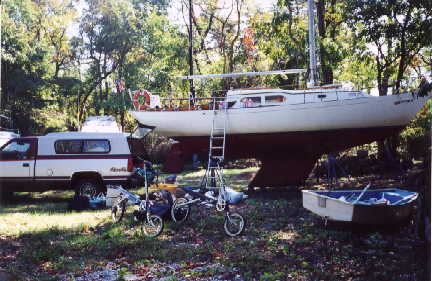 Alas, Titania on the hard! Unloading at Fairview Marina

Follow a Toronto cruising couple we rafted up with at the Shrimp Box at: Perce Neige

Email is welcome (from humans only, please):
titania@gateley.net